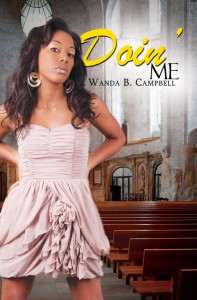 Reyna Mills posed in the full-length mirror. She turned to the right, then to the left. She bent over at the waist and shook her shoulders. Unsatisfied with the results, she repositioned the bustier and performed the test again. Now pleased, she turned to view her backside. The snug eighteen-inch black skirt stopped below mid-thigh and just above the knee. She walked over to the closet and stepped into four-inch-heeled black pumps.

For years she’d heard her mother and her former pastor, Rosalie Jennings, preach against everything from a woman cutting her hair to wearing makeup. “Modesty is best,” the pastor had said. Pastor Jennings would probably have a coronary if she saw Reyna now. Not only had Reyna traded in her shoulder-length tresses for a tapered hairstyle with spikes, but she had also traded in clear lip gloss for a complete makeup kit loaded with color.
The new look was more than a metamorphosis. It signified her genesis. A rebirth. A coming-of-age. Why it took her so long to realize that inside her skull rested a brain capable of making sound decisions about her life, she’d never know. She chalked it up to being hoodwinked, bamboozled, or even voodooed. Whatever the verb, she would never allow anyone to control her again. From this day forward, decisions like where to go and what to wear would be based on what she wanted and liked, not the words of a self-serving dictator wearing a robe and toting a Bible.

Up until two short months ago, Reyna had considered disagreeing with Pastor Rosalie Jennings next to blasphemy on the sin scale. She’d grown up in the church, under the teachings of Pastor Jennings. Her mother and her beloved pastor were friends. Whereas Reyna’s mother had been too occupied with church business to notice Reyna, Pastor Jennings had always had time for her. Reyna had spent many Sunday afternoons at the pastor’s kitchen table. It was at that same table that Reyna had recited the sinner’s prayer and had committed her life to Christ at the tender age of seventeen. Reyna couldn’t pinpoint the date, but at some point the respect she held for Pastor Jennings had been transformed into idolization. That had left her with a busted lip, a blackened eye, and a night in jail for breaking into and entering a private residence.

Reyna turned to examine the tight layered curls on the back of her head. If she’d known she’d look this good, she would have made her hairstylist cut that mess off a long time ago. If she hadn’t been so consumed with pleasing the woman of God, she might have been able to complete graduate school and land a husband. At Pastor Jennings’s request, Reyna had put school on hold and had spent nearly five years chasing the pastor’s son, Kevin. Her grand prize wasn’t the great Dr. Kevin Jennings, but a badge of humiliation she doubted she’d ever live down. Reyna figured Pastor Jennings must have gotten the wires crossed with the prophetic word assuring her Kevin was her husband. Kevin reunited with his estranged wife, and they were now expecting their first child. All Reyna got out of the deal was a new job as property manager for a local real estate office, thanks to Tyson, who just happened to be Kevin’s best friend.

Reyna moved to the dresser and sprayed on Halle Berry’s new fragrance, hoping the fruity scent would make her more desirable, but not to Tyson. She hoped to meet a prospect at the charity benefit dinner tonight. Not that attorney Tyson Stokes wasn’t a good catch. He owned his own home, his own firm, and had no baby mamas. But he was saved, sanctified, and filled to the brim with the Holy Ghost. Something she could do without. She’d been freed from the plantation—that was what she now called organized religion—and she was never going back. She’d give Tyson a superficial friendship, but never would she give anyone associated with God her heart. Pastor Jennings’s manipulation and betrayal had annihilated her trust in God and anyone claiming to know Him. From now on Reyna controlled her destiny.