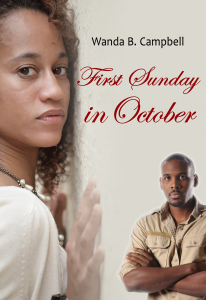 Julia Simone has been through some very hard times. Her first husband died, leaving her a single parent; her second husband was an abusive man. She has overcome all those difficulties and is now very successful. Julia has everything she could ever want: a beautiful daughter, a loving family, a best friend, and is financially sound. The only thing missing from her life is a true love, but Julia has given up on ever finding that. Besides, she does not have time to get involved with someone.

Rev. Reginald Pennington is a man with a past that would surprise many. He is ashamed of his past, but he is now a different man. He is a man with a purpose, to spread the word of God. He has committed himself to his church, heart and soul. When his path crosses with Julia’s, the electricity between them is very evident to everyone but him. He keeps her at arms length, wanting to be with her but telling himself he has no plans to get involved.

Julia and Reggie become fast friends after a business deal between her company and his church. At first, they tell themselves it is merely friendship, and then they become closer and things start to change. Julia’s feelings change when Reggie sends mixed signals. Each has a past that they must come to terms with; things for which they must forgive themselves in order to move forward. Life altering events bring surprises and sorrow that test their faith in God, themselves, and each other.

It’s time to hear a word from the Lord. Let’s all stand and receive our Pastor at this time. God bless you Pastor Pennington. The young minister smiled as Pastor Pennington stepped to the podium.

Julia was not prepared for what she saw next. Nikki had raved so much about how much she loved Pastor Pennington and how much she’d learned from him, Julia assumed he was a much older man. Nikki respected him as being a wise father figure who knew how to relate to his members in the areas they needed most. Pastor Pennington may be all of those things to Nikki, but to Julia he was the finest man she’d ever laid eyes on.

From her seat on the fifth row, she estimated him to be about six-three or six-four and about two hundred and fifty pounds. His smooth dark-chocolate skin matched perfectly with his dark brown eyes. His neatly trimmed goatee outlined a perfect pair of full lips that when parted revealed the sweetest smile she’d ever seen. His teeth were perfectly straight. She wondered if they had naturally grown that way or if he’d worn braces. His ministerial cassock couldn’t hide his perfectly chiseled body. By the cuts in his massive upper body, she could tell he worked out on a regular basis. Looking at him was like looking at Wesley Snipes and Morris Chestnut all rolled up into one. His voice was deep and melodious. When he spoke he reminded her of a young Billy D. Williams in Lady Sings the Blues.

Nikki tapped her on the arm and asked if she was alright. Julia didn’t notice that the rest of the congregation was already seated and she was the only one still standing.

Wanda B. Campbell has done a wonderful job with FIRST SUNDAY IN OCTOBER, her debut novel. She told a story of two people who had never experienced true love and how with forgiveness and reconciliation of past wrongs true love it is really worth waiting on. She pulled you into the lives of the characters and made you feel as though you knew them. I look forward to her next project.
~  The RAWSISTAZ Reviewers

In times when filth is all around, people are swimming in the muck and mire, it is refreshing to read a book such as First Sunday in October. Campbell tell a compelling story of how GOD’s redemption and one’s own personal self love/strength will always be enough to carry one through life’s trials and tribulations.

Filled with honest and real situations that the reader can identify with, Campbell compels the reader to actually walk a mile in these characters’ shoes. Campbell does an outstanding job of demonstrating real family dynamics and how important family is to one’s personal growth.
~ C&B Distribution

First Sunday in October is a realistic portrayal of Christians in love. I thoroughly enjoyed reading this realistically, portrayed book of how Christians date, while also seeing portrayals of real people and their struggles. Ms. Campbell penned a wonderfully, romantic, spirit-filled first novel. I recommend First Sunday in October to those who enjoy Christian Fiction and to anyone who enjoys a well-told romantic story.

Absolutely spectacular! First Sunday in October was the most moving book I have ever read. I cried many tears while reading it. What an emotional rollercoaster Ms. Campbell sets you on. The words run fluidly through you and you too will walk away with tears for the highs and the lows this couple goes through. This is a very inspirational read with many life lessons sprinkled in that make you stop and think. It is a well-thought-out concept of two beautiful, yet flawed people who follow their Christian beliefs. If I could award more than five cups to this story, I would not hesitate to do so.
~ Coffee Time Romance