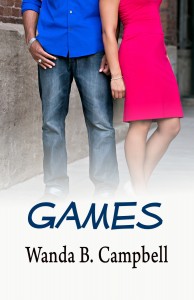 Shay looked out over the city from the bay window. From where she stood, the streets of Oakland were a place of peace and tranquility, unlike her mind. Her thoughts and her desires raged a battle so fierce common sense and immorality collided—the pressure giving her a slight headache. Her mind told her run as fast as her size-nine feet would take her and don’t look back, but the fire fueled with longing racing through her veins conveyed a different story. One time wouldn’t alter her life one bit. One taste of ecstasy wouldn’t bring damnation. Or would it?

Shay didn’t know what to do. She had never wanted anything so badly in her life. The mere fact that she was still standing in his living room after the many warnings and red flags her conscience sent, confirmed that this was a battle she was about to lose. Shay closed her eyes. “God, please help me,” she prayed in a whisper and went back into the den instead of out the front door.

Brian stared out of the kitchen window. He’d finished the dishes ten minutes ago, but couldn’t move. He had a decision to make and didn’t trust himself to make the right choice. He’d avoided making a decision for two years, now it was unavoidable. She was different now and so was he. All evening he told himself this was not right, that God wouldn’t be pleased, but his flesh promised him complete satisfaction. Tonight his one-year-old commitment to God was being tested to the max. No matter how hard he prayed the fact remained: He wanted LaShay Hampton in the worst way. He considered calling his father. Just hearing his voice would bring him back to Earth, but truth be told, Brian wasn’t sure he wanted to come back, not yet anyway. Brian walked into the den, just as Shay turned around. The little strength he had quickly vanished with each step she took toward him. In his eyes, Brian saw that Shay was fighting the same battle as he. Brian placed his arms around her, causing her breathing to accelerate. She returned his embrace and parted her lips. Brian’s darkened eyes seemed to look right through her outer shell and directly into her desires. As if she couldn’t stand the torture, Shay pulled Brian to her and kissed his lips. After a short feast, he pulled back nearly breathless. “Shay, this is going to change everything. If you’re not ready for that, help both of us and leave now,” he warned. Shay didn’t move. He surrendered then. “Tell me what you want, Shay,” his voice deep and loaded with passion. She didn’t say a word, just slowly lifted her tank top over her head. Brian’s heart pounded as he watched her remove the straps to her undergarment. He picked her up and carried her to his bedroom.

“Oh, my God, what have we done?” Shay murmured while covering herself with what little sheet remained on the bed. “We had sex,” Brian answered regretfully. “This was a big mistake. I shouldn’t have allowed this to happen.” Shay’s words added injury to his emotional wounds. He’d sinned against God and in the process he hadn’t physically pleased Shay. Brian sat on the side of the bed with his back to her. “Sorry, I was that bad.” Shay leaned over and stroked his back. “Brian, that’s not what I meant. What we shared was beautiful. Something I’ll always remember. Thank you for giving me the gift of womanhood. But what we did was wrong. We committed sin.” “I know.” He sighed. “I should have stayed sexually pure. I should have been more responsible.” “Where do we go from here?” she finally asked. “I don’t know, but we can’t do this anymore.” She agreed. “I know. I can’t handle this emptiness, this guilt.” He finally turned to face her. “Shay, we cannot go back to the way we were. We-I need to put some space between us. I’ll always remember this night, it was wonderful, but I don’t know if I’ll ever overcome this guilt either.” Shay quietly retrieved her clothing and dressed without saying a word. Just before she left his bedroom she kissed him on the cheek and softly told him good-bye. He stayed in the same spot, long after he heard the front door close.