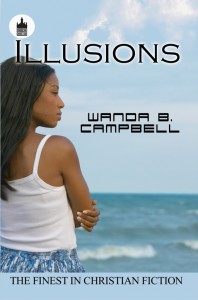 After three years of marriage, Denise Hightower discovers that her husband, Pastor Bryce Hightower, has a secret addiction that not only jeopardizes his marriage, but impairs his ability to effectively preach the gospel.

Yielding to pressure from her mother and her husband, Denise agrees to keep his addiction a secret, although her self-esteem plummets. Her life as the perfect First Lady is falling apart at the seams.

Self-centered and determined to uphold his pastoral image, Bryce is oblivious to his wife’s emotional state. He’s convinced that he can overcome his “little problem” on his own, so he rejects the spiritual help God sends him. But when his secret is discovered, will he be able to come clean with himself, God, and his congregation?

Bryce, having been married for a little over three years, stared appreciatively at the bare woman before him. By all accounts, she was everything he physically desired in a woman; ample and curvaceous from top to bottom. Her honey colored legs seemed to go on forever. He could look at her perpetually and never get tired of the view she provided. Bryce had an arsenal of beautiful women at his disposal, but she was his favorite. He could drink the sweetness of her lips through eternity and still thirst for more.

Bryce often wondered how he ended up with such a beautiful and voluptuous woman, considering he was just an average looking man, and short at that. Bryce was only 5’9” tall. He didn’t house the physique of a body builder, but he did wear his 200 pounds well. Thanks to his love for Ben & Jerry’s Cherry Garcia, Bryce didn’t have a six pack, but a slightly budding pot belly. None of that mattered to the woman before him, though. To her, he was perfect. He was strong and secure. He was her king. Bryce was by far the best lover she’d ever had, and each time that they came together was always better than the time before.

Bryce blocked everything from his mind except her. He moaned deeply as his mind focused on the soft kisses she planted all over him and as her hands massaged him in places only known to her. He leaned back, allowing her full access to all parts of him. Bryce was hers and she could do whatever she wanted to do with him. The semi-sweet chocolate brother was all hers and she knew it. Bryce was so engrossed in his woman, he lost track of time. The knock on his office door brought him back to reality.

“Are you ready, Sir?” The voice on the other side of the door asked.

“I’ll be right out,” Bryce responded after steadying his breath.

He quickly closed the magazine and discreetly tucked it away in its hiding place between the wall and the tank of the toilet. After fastening his pants and belt, he washed his hands without looking in the mirror. He could never look himself in the face after an encounter with the woman he nicknamed, Daija.

Back at his desk, Bryce hurriedly put on his suit jacket and tucked his Bible and notebook under his arm then headed for the sanctuary. It was time for Pastor Bryce Hightower to preach the Word of God.

“Although fiction, Illusions not only exposes a very real secret addiction that many Christian men face, but also offers an insightful resolution that will point them to the road of recovery. It is an eye-opener that should be required reading for men’s ministries everywhere.”

“Illusions is a definite page-turner which reveals the naked truth about the effects of pornography and church leadership. Wanda B. Campbell dares to bring this taboo topic true-to-life as she brilliantly describes the sexual struggles of a young, sincere pastor, and an initially hopeful but now seemingly hopeless and heartbroken first lady. I couldn’t wait to find out what happened next!”

~ Kim Brooks, author of, He’s Saved…But is He for Real? and He’s Fine…But is He Saved?

Illusions will have you on the edge of your seat. You will not want to put this book down until you find out what happens. Campbell has no problem digging deep into some of the troubles of today’s church leaders. Although fiction, the situation is REAL. I definitely recommend this book to others. I cannot wait to see what else Campbell has in store for us.

Illusions is another winner for Ms. Campbell. She has taken a controversial situation and allowed the reader to walk in her characters’ shoes and feel and see what they do. Courage, strength, faith and love are just a few of the characteristics we see. This is such a touching story of the perfect facade we can put up for others to see in spite of our broken spirits. You cannot help but think, learn and grow with this story as it unfolds. I highly recommend this and any other books Ms. Campbell writes. Her stories are that exceptional.