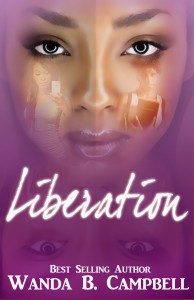 Tired of living a life of manipulation and abuse, Shannon Yates trades in her mini-skirts, colored contacts, and twelve-inch weave for a Bible. Although she accepts the liberation found within its pages, walking in her newfound freedom proves easier said than done. Just when the thing Shannon longs for the most is within reach, insecurities and old emotional wounds resurface, causing her to reject the blessing the Father has for her. Will love cast out all fear and liberate Shannon before it’s too late? Or will she settle for the familiar?

Shannon Yates studied her reflection in the mirror one final time. She had changed outfits three times already, but she was now was pleased with her choice. The navy blue pin-striped pantsuit accented her short frame nicely, and the four-inch navy sling back pumps gave her five-foot-four-inch height a much needed boost.

She turned so she could see the view from the back, but there wasn’t too much to see; Shannon’s size six didn’t allow for much in the area of hips and behind. She turned back around, and while she added the silver earrings and necklace that matched the buttons on her jacket, she finally allowed her eyes to concentrate on her face.

Her appearance had changed drastically in the past year. Her neck was once burdened down from the weight of long blonde curls whose roots belonged to someone else; today, her relaxed black hair was styled in a sassy short crop cut that framed her ebony face. If her neck and shoulders could talk, they would have screamed Thank you!

Shannon had beautiful dark brown almond shaped eyes, but up until a year ago she hid them behind green, hazel, or whatever colored contacts she felt like wearing that day, as well as enough foundation to change and lighten her skin color – but not anymore. After turning her life over to God a year ago, she was a new person. Like the good book says, “Old things are passed away; behold, all things are become new.”

Shannon Yates was definitely a new person with a new outlook on life. A year ago, her main focus was on trying to snag a man who would take care of her and give her a life of luxury; today, a man was the furthest thing from her mind, and a relationship was totally out of the question. With God’s help, she was going to take care of herself. As far as luxury went, she would just have to be content with her one bedroom apartment in East Oakland and her maybe-I’ll-start-maybe-I-won’t used Ford Focus.

Shannon looked at her watch; she would have to hurry if she were going to be on time. She dashed into the small kitchen and ate breakfast. Being very conscientious of her weight, breakfast consisted of only nonfat yogurt and a glass of water. Once she emptied the plastic carton, she went back into her bathroom and quickly applied make-up to her eyes and lips. Pleased, she grabbed her purse and keys and headed out the door, all the while praying that her car would start.

“Thank you, Jesus,” she said when the engine came to life on the first try.

While allowing her car to warm up, Shannon looked around her depressed neighborhood. The only reason she lived in the rough neighborhood referred to as The Village was that was all she could afford on her small salary as an accounts payable clerk in the admissions office at UC Berkeley. She hated the rundown buildings and the constant foot traffic hanging in front of every apartment building and the corner liquor stores. It didn’t matter the time of day or night, there were always some brothas and sistas hanging out, trying to mark their territory or shooting dice. Once in a while, a Caucasian male or female would swoop up in a fancy ride and make a quick transaction, then speed off, leaving skid marks as the only proof of their visit.

Across the street from Shannon’s gray apartment building was a shrine of candles, flowers, poems, and pictures of the latest shooting victim. Shannon didn’t know the kid personally, but she was told that the victim was a fifteen-year-old male. As Shannon began to whisper a prayer for the boy’s family, someone knocked on her driver’s side window and interrupted it.

“Hey, can you help a brotha out? I ran out of gas over there,” a young man with blotchy skin said, pointing in the direction of an old model dark brown Cadillac.

Shannon shook her head. The Cadillac may have run out of gas, but in no way did it belong to this man who was attempting to hustle her out of her hard earned money; that car had been parked in that same spot for at least a month. Shannon didn’t even bother to roll her window down. She just shook her head and shifted the gear into drive. Pulling off, she heard the hustler call her everything but a child of God.

“I’ve got to get away from this,” she told herself when she turned onto International Boulevard. The busy East Oakland main thoroughfare only added to Shannon’s anxiety. International Boulevard wasn’t the average street you could leisurely drive down; if you didn’t stay alert, you ran the chance of getting both you and your vehicle totaled. At any given second, a careless driver could stop the two-way traffic by running a stoplight or spinning a rubber doughnut in the street.

Twenty-five tense minutes later, she pulled into the reserved parking garage at Emery Bay. Shannon smiled and handed her employee ID badge to the parking attendant.

“I haven’t seen you before. Is today your first day?” the middle-age gentleman asked.

“Yes, it is,” Shannon answered proudly.

“Welcome to Emery Bay, Ms. Yates. Have a good day.” He gave Shannon a smile and returned her badge.

Shannon drove around the crowded garage, looking for a place to park her Focus where it wouldn’t look like an eyesore amongst the other SUVs and luxury vehicles belonging to CEOs and other prominent individuals. Shannon smiled as she drove past the stall mark Reserved for CEO Pinnacle Developments, where her new boss’ gold Jaguar Vandan Plaus was parked.

Julia Simone-Pennington held a special place in Shannon’s heart. In addition to being her new boss, Julia was also the First Lady of the church that Shannon attended: True Worship Ministries. She was also the woman who led Shannon to salvation.

Shannon met Julia Pennington almost two years ago, when she was chasing after Julia’s now son-in-law, Brian. From the first moment Shannon laid eyes on Julia, she admired her, and when Shannon hit rock bottom, Julia mentored and nurtured her. Shannon’s mother was alive and well, but Shannon considered Julia her mother figure. It was only because of Julia’s nurturing that Shannon had what little self-esteem she did. It was Julia who encouraged her to go back to school and finish her degree. That’s the reason she was here in the parking garage, looking for a place to park: Julia had hired her so Shannon could quit her clerical job at UC Berkeley and go back to school.

Shannon backed up and squeezed her battered Ford between two SUVs. With only three minutes to spare, she hurriedly grabbed her bag and made a quick dash for the garage elevator. By the time the elevator arrived, another woman and two men had joined her. One of the gentlemen stepped aside and allowed her to enter the car.