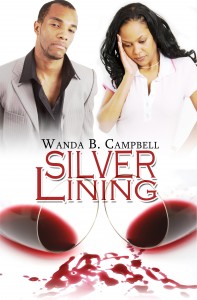 After exchanging vows with a prominent physician, Marlissa Scott-Jennings is prepared to enjoy the life most women dream about, but only a few achieve until demons from her past resurface with a vengeance. Overnight, the perfect life she’d hoped for crumbles and leaves her finding comfort in alcohol.

Leon Scott had it all: a loving wife, children and a thriving business until tragedy strikes and he trades it all in for a bottle in a brown paper bag.

After too much to drink leads to a night in a motel room, Marlissa’s and Leon’s world collide, resulting in friendship and sobriety. On their journey from addiction, the two friends face their toughest task: repairing their broken marriages. Although their spouses may not prove to be as forgiving as the Lord, Marlissa and Leon continue to press forward, despite the obstacles, believing that after every storm there is always a Silver Lining.

Shivers that chilled to the bone caused Marlissa to reach for covers that weren’t there. Like the two previous attempts to cover herself, she came up empty. Frustrated, she tucked her bare arms inside her shirt and shook vigorously, hoping the friction against the musty carpet and her jeans would ignite some heat. Her frivolous effort resulted in a sore shoulder to go along with her already stiff back. Sleeping on the floor in a cheap motel definitely held its disadvantages. Yet, it beat a park bench or homeless encampment.

She moaned and turned her chilled body in the opposite direction to block out undisputed evidence that she’d lived to see another day in what she considered hell on earth. This had to be hell. Mentally, she’d died and gone to hell. She was just waiting for the physical manifestation. Desperately, she prayed that the demons assigned to transport her into the deepest, uttermost part of Hades would hurry. Just how long could a person survive on a diet of Hennessy, vodka, and Cisco, anyway? Hopefully, by evening the devil would be in desperate need of her company, since she didn’t have a dollar to her name and didn’t trust her luck at securing another bodily fluid–stained carpet to lay her head upon.

She grunted, thinking of her beloved husband resting comfortably in his king-sized bed on a pillow top mattress. Like bile, envy collected in her stomach and traveled up her esophagus. With force, she swallowed the melon-sized lump in her throat. It wasn’t Kevin’s fault that she preferred alcohol over him. She’d made her bed and now she’d lie in it, but next time she’d make sure she had an actual bed to lie in.

She peered at the snoring mass beside her and wondered how anyone could sleep so soundly on this filth. Obviously, her drunken comrade had more experience with this lifestyle than she did. The wrinkles and red hue of his skin were indications that he enjoyed the depressing effects alcohol offered just as much as she did, if not more. She wanted to wake him and thank him for the shelter, but first she had to remember his name.